We believe that the first time any newborn has an echocardiogram that it should not only assess function (e.g. PDA) but also rule out structural congenital heart disease.

It is unrealistic for neonatologists to achieve anything like the expertise which paediatric cardiologists have in diagnosing structural heart disease. However it can be argued that neonatologists performing echocardiograms merely need to recognise what is normal, and what is abnormal.

To define or exclude normality requires a number of views to be performed, and all views should be performed in all infants. In all cases it is essential to follow a structured approach to echocardiography. At every scan we would recommend that standard views are gained in sequence, with at least a minimum ‘checklist’ of normal anatomical features confirmed. The standard views for echocardiography are listed below, and example images and anatomical descriptions are given via the links on the right hand side. The echocardiogram should be performed in a logical sequence, taking care to delineate the venous drainage, all four cardiac chambers, the septae and all four valves. For this reason we suggest starting with the subcostal views, however others prefer to leave these views to last in case pressure on the abdomen disturbs the child.

A suggested sequence for a structural echocardiogram is given below.

The first view in the series to exclude structural abnormality is the transverse subcostal view. Place your echo probe under the xiphisternum, with the side marker on the probe pointing directly to the patient's left. Ensure that the screen is set up such that the side marker (e.g. the yellow 'V' in the image below) is positioned to the right of the apex of the viewing triangle. 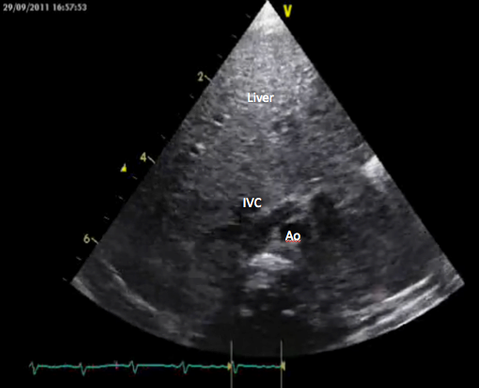 From this view much of the image is liver, but towards the bottom of the screen you should be able to see a circular pulsatile descending aorta, and an oval inferior vena cava. The aorta should be to the subject's left, i.e. on the right of the screen.

The second view in the series is the subcostal atrial and four chamber view. Keep your echo probe under the xiphisternum, but tilt it as if you were looking at the ground below the subjects head, roughly at a 45 degree angle to the horizontal. The side marker on the probe should still be pointing to the left. You'll need to invert the screen vertically so that the apex of the imaging triangle is now at the bottom of the screen (see below).

This view contains key information, and is particularly valuable where other viewing windows are poor (e.g. in pneumothorax/chronic lung disease) as it essentially uses the liver as a window. 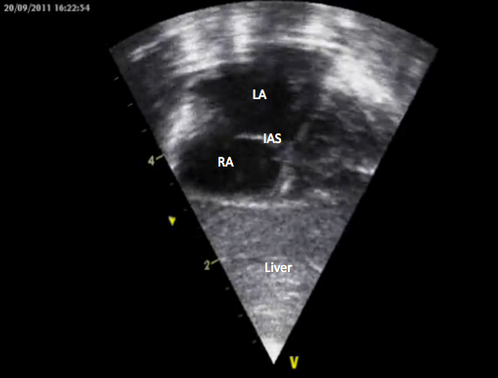 It's also helpful to use colour Doppler to look for flow across the septum. A patent foramen ovale (PFO) is physiological in the newborn (and in around 10% of adults). Generally flow through a PFO is predominantly left-to-right, and therefore will appear red on colour Doppler

From the atria sweep slightly anteriorly to interrogate the membranous portion of the ventricular septum. Again colour Doppler helps exclude a defect (VSD). This is worth doing at this stage as from an apical 4 chamber view the thinness of the membranous septum means that it may not reflect sound waves, and therefore mimic a VSD. 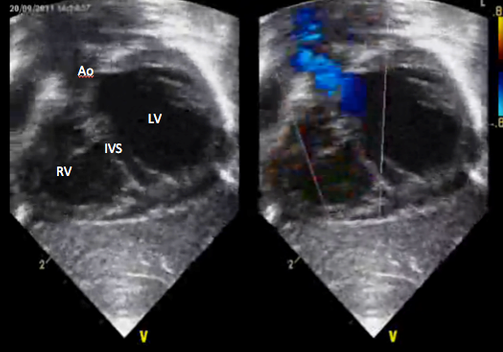 Finally you may wish to sweep yet more anteriorly to interrogate the great arteries. First the aorta should come into view, then the pulmonary artery. To exclude transposition of the great arteries (TGA) the vessels should be clearly seen to cross at this point. 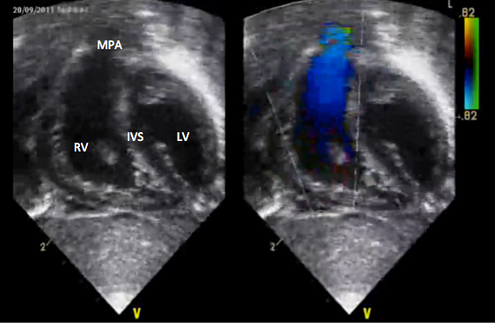 At this point you should also be able to see the superior vena cava (SVC) entering the right atrium (see also the functional echo section).

The third view in the series is the apical four chamber view. Place your echo probe on the apex beat. This can be difficult to palpate in small infants, so it's often best to start just below the left nipple. The side marker on the probe should still be pointing to the patient's left.This is probably the core view for neonatal echocardiography, and actually contains much of the information needed to exclude structural congenital heart disease (though you should always perform the full sequence of scans!)

Note that by convention in neonatal and paediatric echocardiography this view is produced with the apex at the bottom of the screen. Adult echocardiographers may wish to have the image inverted vertically. But try to stick with it apex down - we think it makes more sense anatomically!

First try to capture all 4 chambers of the heart in a single image. The heart should look like an egg standing on its end, with the ventricular septum vertical, and in the middle of the screen: 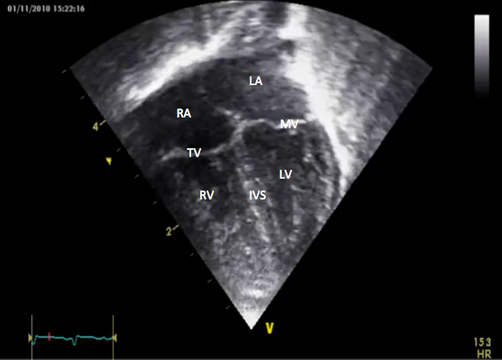 As you can see, the tricuspid valve should be placed more towards the apex of the heart than the mitral valve. This is a subtle but important sign - it essentially rules out atrioventricular septal defects (also known as endocardial cushion defects, and associated with Trisomy 21).

It's worth using colour Doppler to demonstrate normal flow through the mitral and tricuspid valves.

Once again you should use colour Doppler to exclude flow across the ventricular septum which would indicate a VSD. Look carefully for these as they are common, and may also indicate additional structural defects, e.g. coarctation. Within hours of life the normal right sided pressure will have dropped below systemic values, so a VSD will almost always be associated with shunt visible on colour Doppler.

Lastly from the apical view, sweep anteriorly to image the great arteries. For the aorta this is often referred to as the '5 chamber view'.

Once again colour Doppler is useful to delineate the vessels. Now, since blood is travelling away from the Doppler probe, the blood in the aorta and pulmonary will appear blue.

The fourth view in the series is the parasternal long axis view. Place your echo probe somewhere near the lower left sternal edge, around the fourth intercostal space. The side marker on the probe should now be pointing toward the patient's right shoulder.

By convention the apex of the heart is seen towards the left of the screen, the base of the heart to the right.

A standard image should allow you to clearly see normal motion of the mitral and aortic valve leaflets: 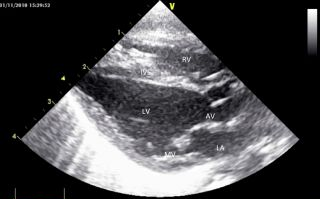 If you're in any doubt about the valve motion, as with any view, use the high resolution zoom feature to focus on the area of interest:

The long axis view is another important view to look for a VSD. Especially a membranous VSD sitting just below the aortic valve. Place the colour Doppler window across the septum, and then sweep to the left and to the right to visualise the whole of the septum:

As ever, remember that ultrasound produces only a 2D image of what is a 3D structure. Using sweeps from side to side ensure that all of the heart is interrogated.

As part of the sweep you will tilt to look up towards the patient's left shoulder, allowing you to visualise the pulmonary valve:

The valve leaflets should virtually disappear during systole as they are so thin. Any thickening of the leaflets suggests valvar stenosis. Use colour Doppler to interrogate flow across the valve: 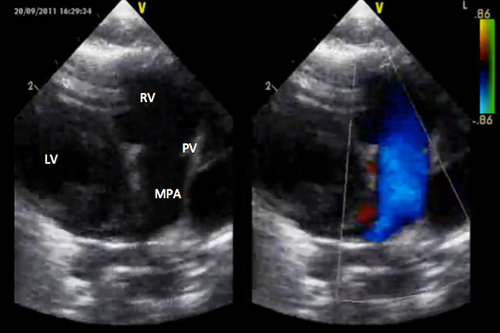 You will also tilt down towards the left hip, allowing you to visualise the tricuspid valve: 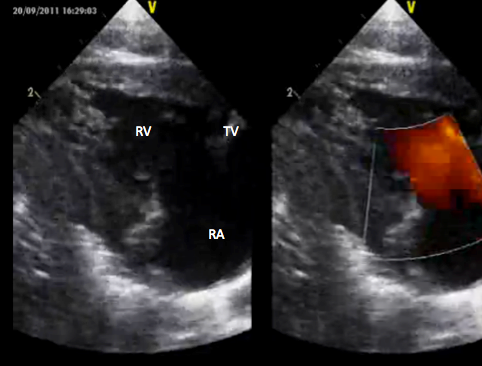 The fifth view in the series is the parasternal short axis view. Leave your echo probe in the same place as it was for the long axis imaging (somewhere near the lower left sternal edge, around the fourth intercostal space) but now rotate it 90degrees clockwise. The side marker on the probe should now be pointing toward the patient's left shoulder.

This view is again slightly less anatomically tangible than the apical four chamber view, so take a second to absorb it. You are now trying to image along the short axis of the heart, as if you were cutting it crosswise.

At the initial view you should be able to see a healthy, tricuspid aortic valve, sometimes called the 'Mercedes Benz sign'. You may also be able to see the left and right coronary arteries. 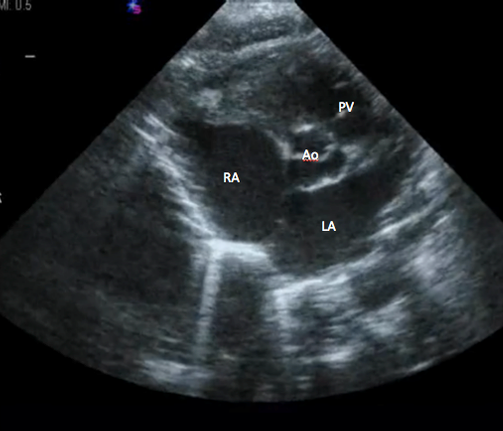 By tilting to look towards the patient's left hip you can gradually scan through the left ventricle at different levels acquiring a basal view:

By tilting to look towards the patient's left shoulder one can again visualise the pulmonary valve: 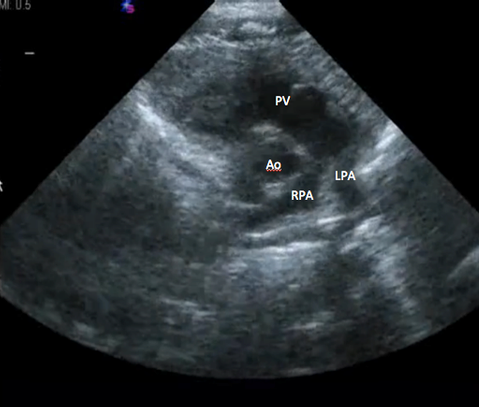 This view is obviously a key one when looking for a haemodynamically significant PDA, see the functional section for greater discussion of PDA assessment. However ductal patency should be investigated in every echo.

Use a high sagittal view to demonstrate the proximal pulmonary trunk and distal aortic arch. A duct, if patent, will be visible joining the two.

The duct is often visible on 2D echo:

If shunting left-to-right (systemic to pulmonary) the PDA will be even more clearly visible as red flow towards the probe:

Smaller PDAs may be obviously tortuous:

However a key step is to look for a PDA which is shunting right to left (pulmonary-to-systemic). These ducts appear blue on the screen, and can be very hard to distinguish from the branch pulmonary arteries. However look carefully - a duct shunting right-to-left after the first hour or two of life is ALWAYS pathological, and indicates either persistent pulmonary hypertension of the newborn (PPHN) or structural heart disease.

The final view in the anatomical series is the arch view. Keep your probe where it was for the ductal view, but now rotate it around 450 clockwise. The marker should now be pointing towards the patient's left shoulder. This is one of the hardest views to acquire, and often requires a repositioning of the probe to the right or left of the sternum. Having the patient's head extended, e.g. by putting a roll under the neck, often helps.

In theory you should be able to see the full length of the arch (round to the left subclavian artery) on a single view:

It's important to see right round to the left subclavian as most coarctations occur at this point. Colour Doppler can be very helpful to look for turbulent flow at the point of a potential coarctation. Flow should look laminar: