There is now a strong evidence base for use of POCUS to confirm PICC tip position, and a growing number of users are using POCUS to assist in UVC insertion

Big thanks to Courtney Juliano, Ben Ratner and Minso Kim, all faculty at Mount Sinai in New York. Their combined ultrasound genius allows us to find virtually every PICC and UVC with ultrasound to optimize positioning and minimize need for x-rays and repositioning!

Multiple studies have shown efficacy of the technique, with application of POCUS leading to reduced number of line manipulations and radiographs. POCUS appears particularly valuable when imaging 1Fr gauge PICC lines, which are difficult to visualize on x-ray. The technique does remain user-dependent, with significant scope for failure to visualize a line in the vasculature or heart; as well as scope to misinterpret image artefact as a PICC line. For this reason great care should be taken to interrogate for line position from multiple views and often with multiple probe types. In particular lines rapidly become invisible to ultrasound when the ultrasound beam is not directly perpendicular to the line itself, so consideration of probe position and line path is key. It is often helpful to record multiple cine-loops and slow them down to visualize the tip position. See below for approach to confirmation of line position with POCUS.

The PICC line should be visualized in either the left or right brachiocephalic vein using either the high frequency linear probe or the sector (cardiac) probe. 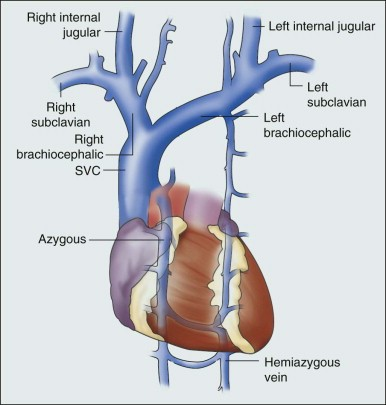 Remember that the brachiocephalic veins are relatively superficial (depth less than 2cm in most neonates) so minimal depth is required.

Then track the line until it enters the superior vena cava. Confirmation of the site of the proximal SVC is best obtained from a high parasternal view with the probe tiled downward to look towards the heart. The two brachiocephalic veins can be seen forming the upper limbs of an asymmetric ‘Y’ shape, with the right brachiocephalic (on the left of the screen) being more vertically oriented than the left, reflecting the anatomy as shown in the figure above.

Adding colour Doppler to the view can help differentiate between the different blood vessels. Flow in the SVC will be away from the probe, so will appear blue on color Doppler. The ascending aorta may also be visible to the patient's left (on the right of the screen).

Occasionally a PICC can be seen crossing to the opposite brachiocephalic vein rather than entering the SVC, this is only appreciated from these brachiocephlic views.

Next visualize the full length of the SVC from a parasternal/sagittal view. The SVC is best found by isolating the ascending aorta and the tilting to look fractionally to the subject’s right side. The SVC can be followed from the brachiocephalic junction to the right atrium.

**Even if no line is initially apparent it is vital to follow the SVC down to the right atrium. If the angle of insonation is not perpendicular to the line it can be invisible to ultrasound**

Once you become adept at this view it can be relatively easy to spot a PICC line that is placed too deep and is well into the right atrium.

The even more zealous PICC placer might manage to get the line all the way into the right ventricle....

With care to avoid contamination of the sterile field at the PICC insertion site, a PICC which is placed too deep can be gradually retracted while being imaged in real time, guaranteeing that the line tip ends up in the correct place, and avoiding the need for multiple x-rays and repositioning attempts

The PICC line should be visualized in the IVC as it courses along the right side of the spine towards the right atrium. If the line tip is substantially below the level of the diaphragm it is often obscured by bowel gas and only visible on x-ray. That said 1Fr lines are often invisible on x-ray too! Imaging from a coronal retroperitoneal view may help. Next visualize the full length of the IVC from a midline sagittal view. The IVC must of course be distinguished from the descending aorta.

Imaging the PICC in the IVC from an axial as well as the sagittal view helps confirm that the line is where you think it is.

**Even if no line is initially apparent it is vital to follow the IVC up to the right atrium. If the angle of insonation is not perpendicular to the line it can be invisible to ultrasound**

Finally image the right atrium from both the parasternal short axis and bicaval views. Again a range of views is required to avoid missing a line which is not at a 900 angle to the ultrasound plane.

Umbilical venous cannulas (UVCs) are a hugely valuable tool in the NICU. The can often be placed rapidly and simply, and facilitate administration of fluids, TPN and pressors to the sickest, smallest infants. They are also relatively easy to visualize on ultrasound.

UVCs are generally best visualized from a slightly modified midline sagittal view - often with sliding the probe a fraction to the baby's right, and rotating a touch clockwise. From this view the UVC is seen entering the right atrium and angling towards the foramen ovale. The line shown below is too deep into the heart, and will be adjusted (see below) but is given as an example image.

But even a large, echobright line like a UVC becomes invisible if the ultrasound operator is not diligent in their scanning. Look at this next video:

Check out the time stamps on the two videos - they were taken two minutes apart. In both cases the UVC is in the heart, but in the second video it's invisible to ultrasound. Why? Because ultrasound probes send out a beam of sound, and only register an object when echoes are received back at the emitting probe. When the object being imaged is entirely smooth the ultrasound beam bounces off the object in a single direction; and if the beam is not perpendicular to the object the echo bounces away from the probe rather than back towards it. 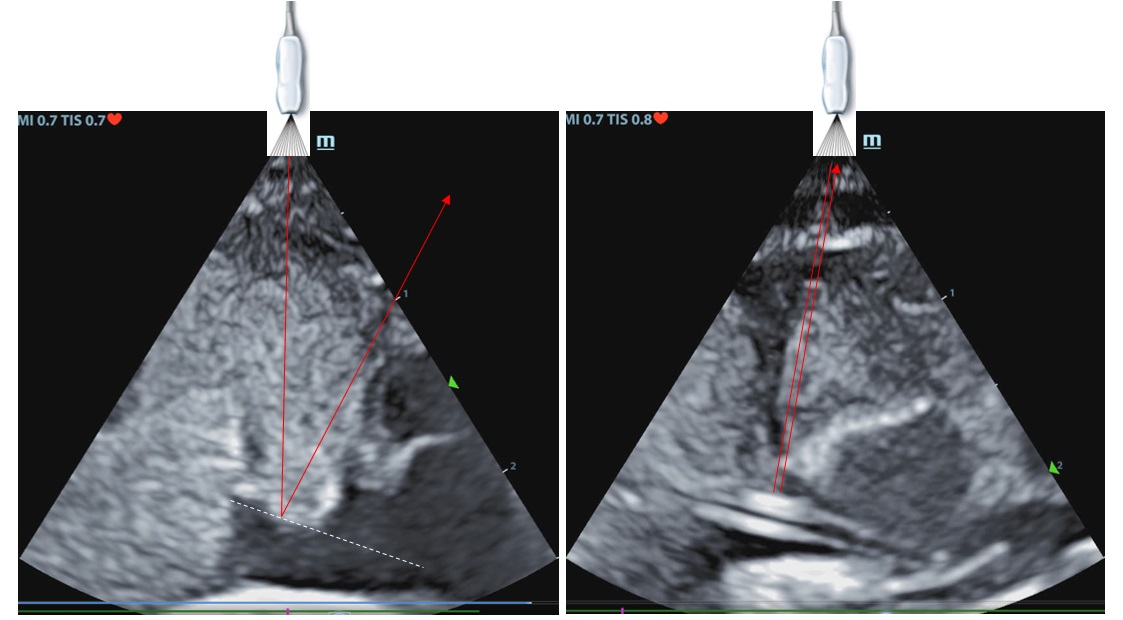 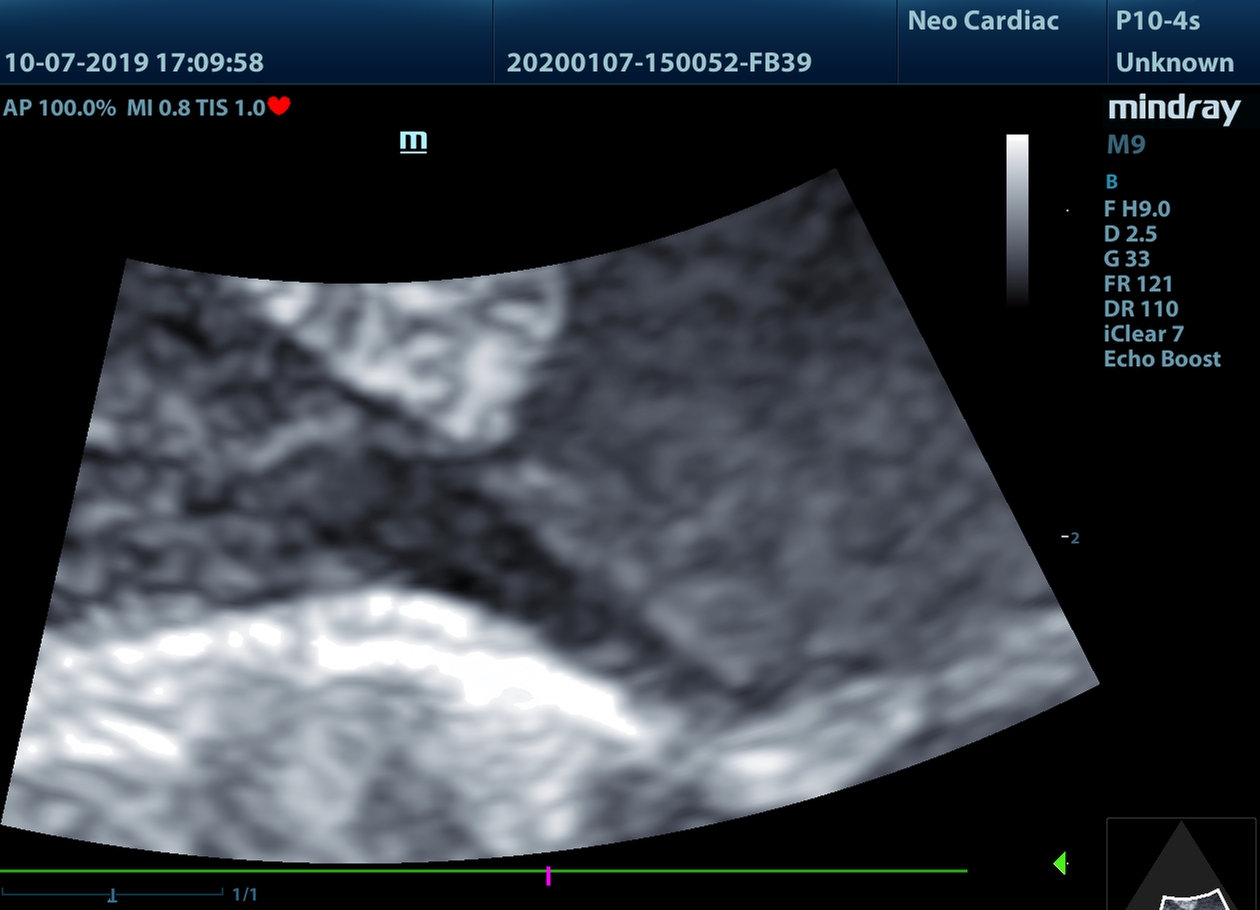 If it isn't clear to you why there is a shadow behind where the UVC is sitting you need to check out our ultrasound physics section for info on shadow artefacts!

As with PICC lines, with care to avoid contamination of the sterile field at the UVC insertion site, a UVC which is placed too deep can be gradually retracted while being imaged in real time, guaranteeing that the line tip ends up in the correct place, and avoiding the need for multiple x-rays and repositioning attempts

Don't you hate it when a UVC goes into the liver rather than the heart?! 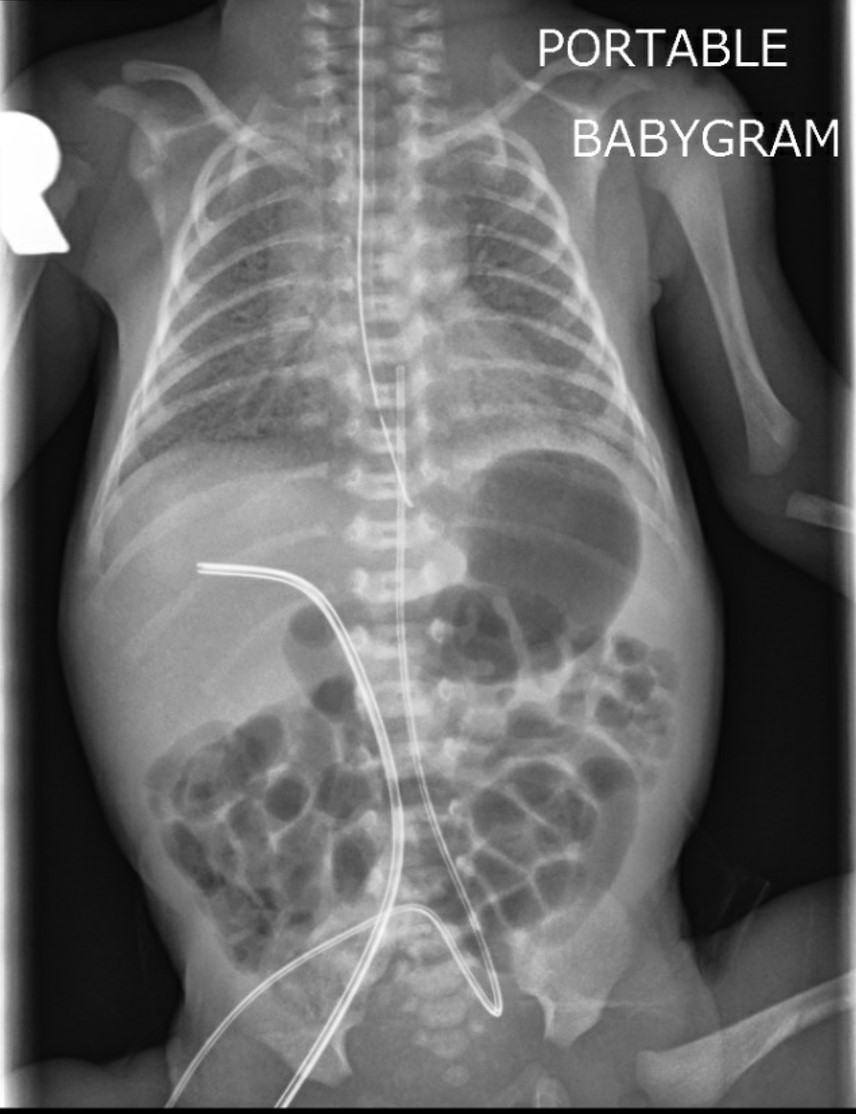 Yeah, we do too, but we think there may be a solution. First of all we need to remember the anatomy of the umbilical vein, umbilical recess and ductus venosus.

If you have a UVC in the liver, try imaging the umbilical recess in real time as you adjust the line. Pull the UVC back to 2-4 cm, until you see the tip. Flushing with a small volume of saline (0.2ml) can produce some extra contrast to be sure the tip is where you think it is.

IColor Doppler can help you differentiate the ductus venosus from the hepatic veins.

Straight after you've flushed you'll often see that the ductus venosus is wider, and if you advance the UVC again it might magically go through the ductus venosus and reach the right atrium! It doesn't always work, and trying this is at one's own risk, but more often than not it does the trick. 5 minutes work to potentially have secure central access for 5-7 days! We are studying this approach prospectively to quantify success rate and safety.